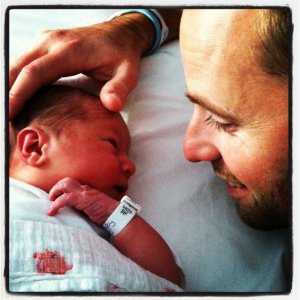 Blessed be God, my mountain, who trains me to fight fair and well…
Make our sons in their prime like sturdy oak trees,
Our daughters as shapely and bright as fields of wildflowers…
How blessed the people who have all this!    How blessed the people who have God for God!  _Psalm 144: 1,12,15 (Msg., emphasis added)
“A good father was meant to teach us truly about our Father God, and teach us to walk with him.” _Way of the Wild Heart, Eldredge (p.35)

In the months leading up to his arrival, Molly and I struggled to decide on a name for our third child – our second son. I knew we weren’t the first couple to walk into a delivery-room without any certainly of what we were going to name our baby – but despite months of prayer, hours of conversations, genealogical research (which included starting an Ancestry.com account thanks to my friend, Terry Harmon…sorry we didn’t name him Terry) and even delving into a few baby name lists (which isn’t how we usually roll), we were still stuck and undecided…just hours after the newest member of the Shelton-clan arrived on June 14th.

What seemed to make this process of deciding on a name a bit challenging for us was how certain we were early in our marriage of what we would name our first girl and first boy (if we were to be blessed with one of each).  We even had a few additional names picked-out for more girls.  Having decided to not find out the sex of our first two children, we agreed it might be best to find out with this one; and to a bit of our surprise – and quite unmistakably, I might add – we discovered in January that our third would in fact be another boy.  I have to admit, this news wasn’t exactly met with excitement.  For starters, we were just coming off a second broken arm in less than four months with our son, Elisha (who already seems to be on the path toward an illustrious career in base-jumping), and the thought of raising another accident-prone, dare-devil boy was a bit overwhelming for us to consider at the time.  To be honest, I think we were both hopeful for another girl based on our experiences so far with Elisha.  Also, my daughter Julia had been asking Jesus for a baby sister for months – long before mommy and daddy found out we had another Shelton on the way – and I had become all but convinced through her prayers that we would be confirming this for her.

Obviously, the last few months have provided some opportunities to prepare (as much as anyone possibly can) mentally, emotionally and spiritually to now be a dad of…boys.  Yet, with all that time to prepare, the name seemed to elude us.

So, on the morning of June 14th, with only about an hour’s-worth of sleep, a blank birth-certificate and the two names we had brought with us, I was anxious for us to go ahead and decide on a name.  I was also growing increasingly uncomfortable looking at my son and not having a name to call him by.  Of the two names we had narrowed our decision down to, there was one name I had grown particularly fond of; but as I looked more and more into my son’s face, I wasn’t convinced it was his name.

Being about 51% sure, we decided to utter the name, ‘Zeke’ over our new little man.  As a sort of litmus test, I sent a couple of text-messages out to family sharing the name – mainly just to see how it looked and felt (thinking, if we don’t like it, we can always go with the other name).  I was also concerned about how difficult it might be to pronounce Ezekiel Shelton, not wanting to give my kid a complex for the rest of his life (Lord knows he’ll have enough of those).  So, as I welcomed my parents to the hospital Thursday morning, I asked my dad if he could say, “Ezekiel.”  He nailed it, which brought an added sense of affirmation.  My sister-in-law was the first to officially announce the name for us on Facebook (which we were thankful for), and it quickly went ‘viral,’ met by an overwhelming response of ‘congratulations’ and well-wishes.

And so, any uncertainties or doubts we had left by this point quickly (and have since) dissipated.  “My son, your name will be Ezekiel James…”

Now, I love etymology. Though I’m certainly not a scholar or an expert here, I do have a bit of a heightened interest in the meaning of names.  In fact, I love searching for and discovering meaning in almost everything.  Combined with my perfectionism (which I seem to be forever-recovering from), perhaps you can understand why deciding on a name is such an overwhelming and challenging task for messed-up people like me.

Anyway, what I love about names, especially in the ancient Biblical context, is the significance and meaning we often find in a name.  Though we are given the ability to make a name for ourselves (in terms of reputation) as we grow older, a name is something that has the ability and power to shape our identity and direction in life (Though there are many examples of this in Scripture, I’m thinking specifically of Jesus’ words to Peter in Matt. 16:18).

As I look at my son, Ezekiel, I’m proud of the meaning and significance of his name – the Strength of God.  In the Old Testament scriptures, we find the words be strong and courageous being uttered over  leaders (most notably, Joshua – Deut. 31, Joshua 1), warriors and the people of God – a powerful reminder that it is the Lord who is the source of all our strength and righteousness (Isaiah 45:24), and that it is the confidence of His Spirit that has been set within us that provides the courage to stand in the face of fear. (Hebrew word for spirit is RUAH, which is also translated, courage)

Something that I have learned in my brief experience as a father is regardless of my dreams, hopes and expectations for my children, I ultimately want to be responsible to love my children into the future that God has for them and to reach their full, God-given potential by becoming the woman and men that He dreams for them to be.  (also known in fancy, theological terms as Escatological Realism).

And as I continue to pray for God to reveal His plans and dreams for the lives of my children to me, my ultimate desire is to see my children grow to become sturdy oaks of righteousness who desperately love God, who genuinely love others, and who live into the significance of their names as they glorify the Name that is above ALL names…Jesus.