Happy Birthday to my dad today (April 28th) who turns 73!  We’ll be heading up to celebrate with him this evening, which we’re so excited about!  I’ll be catching back up the middle of next week as I welcome in “the early-30’s!”  Whew!  Life keeps moving…

Speaking of which, it’s amazing to watch kids grow up, isn’t it?  Too bad we can’t slow things down a bit more.  A few weeks ago, Julia began sitting up on her own – which has led to several other new things, like reaching for toys and foods and getting into things we’re learning as her parents to keep out of reach.  It like there’s something new every single day now! 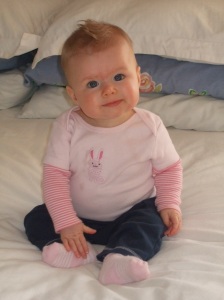 Here’s one of her most recent pictures, which I can’t help but to show off as a proud father.  Heck, just last wee I had two dads of young boys make dating-proposals to us – to which I responded, “Not until she’s at least 30.”  (That may sound ridiculous and unrealistic, but as I learned recently from one of my friends, when I lower that requirement to 16 or 18, she’ll think I’m doing her a favor!)

Also, last week our friend, Vickie, noticed while watching Julia that her first tooth had come through.  I have to admit as her parents we felt a little embarrassed that we hadn’t noticed it sooner.  I guess another difficult thing for us about Vickie noticing it first is that she’s a ‘yankee;’ so of course we had to tease her and lead her on for a while that it was actually some abnormal growth on Julia’s gum rather than an actual tooth.  (Way to go, Vickie…that totally explains all the fussiness we had to deal with last week!)

One Reply to “life keeps moving…”